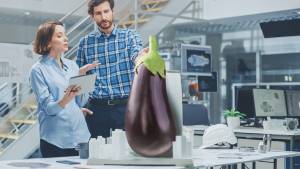 The small Queensland town of Melongena has successfully raised funding through the local Council of Tourism to build the next ‘Big Thing’ to reflect its main industry and boost tourism to the town.

Around the country, Australia is home to a number of ‘Big Things’ including the Big Banana, the Big Pineapple, The Big Cherry, The Big Orange, you name it. But this might be the biggest Big Thing yet!

The town reportedly held a vote for the new structure, to decide on which fruit or vegetable would best represent the town, and they collectively decided the next Big Thing to grace Australia’s shores is the Big Eggplant!

The structure is reported to boast an impressive 10 metres and 6 inches high, and it will be built in the heart of the central Queensland town of Melongena. The structure will be built entirely out of a sustainable fibre made from recycled plastic, in an attempt to reduce the town’s carbon footprint and be a point of difference from other ‘Big Things’ around the country. This innovative design will protect the structure from moisture due to wet weather events, as well as protect it from the sun in hotter months.

The town’s residents had much to say about the proposed new feature of their town.

Mayor Hugh Moore said he was excited to have an impressive new feature to bring people to Melongena:

“It’s a quiet town here, but we get a few people make the detour off the highway to come and visit our town. But this will really help to boost the local economy, and bring more new faces and exciting opportunities to our community. We are excited to see this structure built, and are proud to be supporting not only our local farmers and greengrocers, but also promoting the consumption of fresh fruit and veg. There was much discussion around the design of the eggplant, our original proposal was six meters high, but we all agreed that bigger is better”

Abe Surd, a local Eggplant grower was all-too excited to see the giant fruit in his town, saying it will have a positive impact on the consumption of locally grown eggplants.

“I’ve been growing Eggplants in this region for a long time, generations of my family have been here working the land, and it’s nice to get some recognition for that” says Mr Surd.

The town’s Florist, April Fuller said the Giant Eggplant comes as a happy surprise, and couldn’t come soon enough, but welcomes the boost it will give to the town.

“Business has been a bit slow in this town, so it will be great to spread the love to our region!” says Ms Fools.

The Giant Eggplant is estimated to be erected by the 1st of April, 2023.