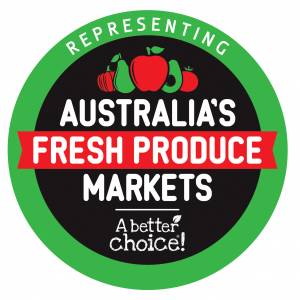 Wins Marketer of the Year Award

Fresh Markets Australia (FMA) and the Central Markets Association of Australia (CMAA) are delighted to announce the ‘A better choice!’ program is proud to receive the 2021 PMA-Produce Plus Marketer of the Year Award (MOYA), sponsored by Seeka.

Australasia’s premier marketing award for the fresh fruit, vegetable and floral industries was presented at the Hort Connections 2021 Gala Dinner in Brisbane on Wednesday, 9 June 2021.

‘A better choice!’ is the first national program designed to encourage consumers to shop for fresh produce at their local independent fruit and vegetable retailers. The joint FMA and CMAA initiative supports more than 550 retailers across Australia.

PMA-Produce Plus recognised ‘A better choice!’ for its Shop&Win campaign. MOYA judges were impressed by the way the campaign harnessed a wide range of marketing tools – from point-of-sale activations through to digital advertising – to drive awareness of the competition, along with participation.

“Capturing such a large audience over a relatively short time was very impressive, and from all reports interest in the competition has continued to grow since MOYA nominations closed. The ability to unlock added value for a cluster of independently operated grocery stores also demonstrated a high degree of marketing innovation in the eyes of the judges.” said Matthew Jones, Editor of Produce Plus Magazine. 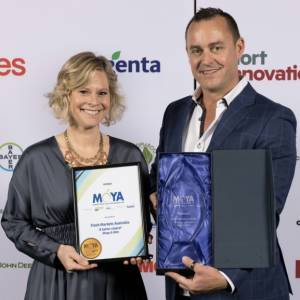 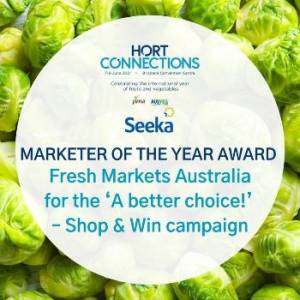 James Patrick, National Program Manager  said, “It’s an honour in itself to be a part of a program that represents independent fruit and veg shops around the country; It’s a great honour for the team and all those involved around the country supporting Australia’s local fruit & veg shops by the ‘A better choice!’ programme to win the PMA-Produce Plus Marketer of the Year Award for 2021.”

“This program was established to promote the independent retailers, greengrocers and fruiterers of Australia, who are key buyers of the Central Markets. Independent retailers are such a large and important part of the history of this great industry, and when they prosper, it benefits the whole Central Market supply chain. We are so proud that the ‘A better choice!’ initiative has received this award in recognition of its outstanding efforts promoting the sector.” said Mark Maskiell, Chairman of Central Markets Association of Australia (CMAA).

Shane Schnitzler Chairman of Fresh Markets Australia (FMA) said “This award recognises the efforts of this initiative with such significant importance for the independent retailers nationwide. Many of which are owned and run by families who are a large part of the heart and soul of this industry and have been for generations. This award recognises the important role the ‘A better choice!’ programme plays within our industry, and the support behind the initiative keeps it growing for years to come.”

The ‘A better choice!’ program delivers two campaigns per year with the next campaign already in production and will be launched in Spring 2021!

Fresh Markets Australia (FMA) is the national organisation representing each of the five Market Chambers, which themselves are organisations that represent the fruit and vegetable wholesalers located in each of Australia’s six central Markets (Brisbane, Sydney, Melbourne, Adelaide, Perth and Newcastle).

About The Central Markets Association of Australia (CMAA)

The Central Markets Association of Australia (CMAA) was formed in 2001 to provide a peak body for the five capital city wholesale central markets around Australia. Its members include the Adelaide Produce Market, Brisbane Markets, Perth Markets, the Melbourne Market and the Sydney Markets.