Why Aussie Mums and Dads are Becoming Blenditarians 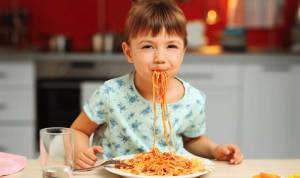 By AMGA Dietitian – Jane Freeman (APD)
I’ve been a dietitian for over 20 years and have additional qualifications in paediatrics. In my career I have worked at several large international schools to help develop menu’s that are not only tasty for the students to eat, but are also nutritious – to sustain their activity levels throughout the day, and to support their extra growth and development needs.

I am also a mother of 3, and I know too well that putting healthier, nutrient rich meals into their tummies can sometimes feel like an uphill battle.

It is important to remember that children are not mini adults when it comes to nutrition, and there are valid reasons why your child might refuse food. Parents know that serving foods with a variety of fruits and veggies is great for their nutritional needs, but this also means the child is eating a wide range of foods textures, tastes and meal presentations. Many younger children find eating certian foods difficult because of how it looks or tastes, and while they are often labelled as difficult or fussy eaters, food refusal is often more of an aversion to an initial experience – such as eating a cold and hard to chew piece of broccoli. If they don’t like a food the first time, chances are they will be reluctant to try it again.

If you want to save your sanity and increase their nutrient intake, it can be better to offer healthier or tweaked versions of their favourite eat meals which are easier to eat, such as spaghetti bolognese, cottage pie or a mini burger.

THAT’S WHY I LIKE TO RECOMMEND A BLEND OF MUSHROOMS AND MINCE.

By simply dicing whole fresh mushrooms and adding them to recipes your child already knows and loves to eat, you will transform their favourite dinners into a super nutrition charged meal, that is lower in (the unhealthier types of) fat and salt– and your kids will actually eat it, because it looks and tastes like it usually does.

This ‘stealth health’ approach to feeding children isn’t a new concept, as parents have been hiding veggies in food for many years, but there are some other specific reasons why mushrooms with mince makes the perfect blend.

Why a blend of mushrooms + mince works better than other veggies:

So, give it a go! Start with blending mushrooms and mince in your next family spaghetti Bolognese – it’s a great way to boost the nutritional value of our family meal, while reducing the amount of meat they eat – in a stealth health way. They are sure to lick their plates clean.

The Blend cooking technique works in ANY minced meat recipe, so try it with Tuesday taco night, classic rissoles, and burgers on the BBQ too.

Jane Freeman is the Dietitian for the Australian Mushroom Growers Association. With a career spanning more than 20-years, Jane is internationally revered dietitian nutritionist, an IOC (International Olympic Committee) qualified sports nutritionist, award-winning author and a Leiths qualified cook. She is dedicated to delivering practical nutrition advice that is easy to understand and adopt.
Summary Article Name
Why Aussie Mums and Dads are Becoming Blenditarians
Description
In a nation where ‘meat and three veg’ has traditionally ruled the dinner table for generations, and a family BBQ or dinner at the local pub typically serves up a piece of steak that’s so big it takes up half the dinner plate – it’s good to see that millions of Australians are starting to shift towards a more plant-focused, flexitarian diet.
Author
AMGA Dietitian – Jane Freeman (APD)
Publisher Name
AMGA - The not-for-profit peak-industry body for the Australian mushroom industry
Publisher Logo