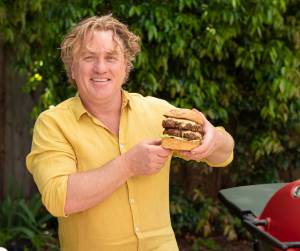 ‘A better choice!’ has proudly partnered with the Australian Mushroom Growers Association (AMGA), the national peak industry body for the mushroom industry, to help them promote their summer campaign ‘Mushrooms + Mince = The Blend’ – which launches on December 1.

The three-month campaign has been created by the AMGA to promote a simple cooking technique, to encourage all Australians to cook healthier, more plant-forward meals at home – using a combination of mushrooms and minced meat. By simply replacing a portion of mince with finely diced mushrooms, family favourite recipes like spaghetti, tacos, meatballs and burgers are instantly boosted with nutrition and are lower in fat and sodium. Mushrooms also have a unique flavour advantage due to their umami flavour (which is the same flavour of meat); by adding mushrooms to minced meat dishes, the ‘meaty flavour is enhanced – this is a benefit no other vegetable can claim.

According to the Meat and Livestock Australia State of Industry Report 2020, the average Australian eats 25kg of beef a year, with 30% of it being minced. With one in three (32%) Australians actively trying to reduce their meat consumption, and beef mince recipes, being considered as an ‘easy everyday’ meal to prepare, substituting some mince for mushrooms provides a simple way for Aussies to achieve their health-related goals. Parents will love the ‘steal health’ approach to mealtime, with a simple swap of ingredients in meaty dishes they know their kids will love.

The objective of the campaign is to educate families and seniors about the mushroom + mince blend, to increase their purchase intent for mushrooms, with the ultimate goal for mushrooms to be considered as a staple ingredient in all minced meat dishes. To help with the adoption of the new cooking technique,  Celebrity chef Adrian Richardson has been appointed as an ambassador for The Blend campaign. Adrian is a TV cooking personality and star of Good Chef, Bad Chef and former cooking shows Secret Meat Business and Boys Weekend is the owner of La Luna Restaurant in Melbourne and the author of MEAT. Adrian has built his career by cooking great meaty dishes, and his role as ambassador encourages all Australians to become ‘Blenditarians’ and to reassure audiences that cooking with a mushroom and mince blend enhances the meaty flavour, while adding juiciness to minced meat dishes.

The AMGA has produced Richo’s Blended Recipe eBook featuring Adrian’s signature mushroom and mince recipes, along with a series of cooking videos, which are accessible via the new website www.blenditarian.com.au

Members stores in QLD, NSW, VIC and SA, will display collateral such as posters, entry pads and wobblers – to be erected on the mushroom displays in-store, promoting ‘The Blend’ campaign and giving consumers an opportunity to win one of four Weber® Family Qs. This incentive encourages consumers to learn more about The Blend and the benefits of adding mushrooms to every minced meat dish – which will help to increase mushroom sales in our member stores.

National Program Manager for ‘A better choice!’ James Patrick said, “It’s great to be able to partner with AMGA and promote mushrooms in our member stores. Independent retailers represent over 10% of all fruit and vegetables sold in Australia and are big advocates for great produce and supporting all growers big and small that sell through the Central Markets of Australia.

‘A better choice!’ will also carry out a digital campaign leveraging our social media followers (180k+) and weekly consumer e-newsletter (70k+) also promoting ‘The Blend’ campaign and all things great about mushrooms contributing to AMGA;’s digital strategy over the three-month campaign”.

AMGA Communications Manager, Leah Bramich explains the benefits of partnering with ‘A better choice!’, “Local greengrocers are so important to local communities, and a big part of our sales channels for Mushrooms. We simply don’t have the manpower to connect with such a large network. Partnering with ABC not only distributes the point of sale directly to stores on our behalf, but we are also able to connect with fresh produce loving, engaged home cooks via their digital channels, which will be a huge benefit to our campaign.”

Get in touch with your local ‘A better choice!’ representative to find out more.