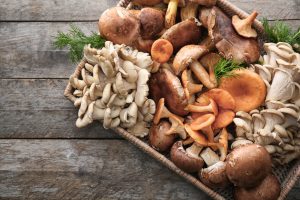 Few people could argue that mushrooms are glamorous. Their lack of eye-catching bright colours or shiny skin leaves them often overlooked when placed alongside some of the more colourful fruits and vegetables found in the produce section. But what mushrooms lack in attractiveness, they more than make up for in nutrition – a fact that is only just starting to be widely recognised in the health community.

But just what are the specific attributes of a mushroom that make them so unbelievably good for you? A closer look at the make-up of a mushroom reveals just how nutritious they really are:

Mushrooms are absolutely packed full of vitamins, particularly the B vitamins riboflavin, niacin and pantothenic acid. These substances are known for their important role in the nervous system, but are also vital to metabolic function, as they all play some part in the process of breaking down glucose, alcohol, and fat.

Mushrooms are also particularly mineral-rich, and this includes potassium. A significant mineral vital for human heath, potassium is important because it controls water and mineral balance in the body, making it key to the regulation of blood pressure. Potassium is also involved in the maintenance of nerves and muscles, including heart function.

Selenium is an antioxidant used by the body as protection for cells from damage that can lead to heart disease and cancer, among illnesses. Good sources of selenium tend to be animal in origin, with some grains also yielding a quantity of the substance, leaving vegetarians, vegans, and celiac disease sufferers with few options. The good news for these groups with specific dietary requirements is that mushrooms are a good, rich source of selenium.

Another bonus for those with celiac disease is that mushrooms are entirely gluten-free. Aside from the benefit of being able to eat a naturally derived, unprocessed product that has a great many dietary benefits, mushrooms possess much of the umami flavour often associated with meat products, many of which are far from celiac-friendly. With mushrooms, vegetarians, vegans, and celiac disease sufferers can achieve that rich umami flavour without eating meat.

And because of that meaty umami flavour, coupled with a mushroom’s robust texture, these remarkable fungi can be used as a meat substitute, adding depth to a vegetarian dish, or bulking out a meaty dish with a foodstuff that is fat and cholesterol free.

In addition to the flexibility, nutritiousness, and delicious flavour of mushrooms, they are not only fat- and cholesterol-free, but also low in calories. This means that they can aid weight-loss as a full or partial meat substitute, giving dieters a robust meaty taste that won’t add extra calories. And because mushrooms are natural, and nutrient-rich, they are far superior to the many processed meat and diet products which are often used to flavour or add substance to a diet-friendly meal.

All of the benefits, none of the drawbacks; that’s how many dieticians are now describing mushrooms. And it’s easy to see why. They are absolutely packed with the kind of super-nutritious content everyone could stand to be eating more of, all wrapped in a fat-free, low-calorie package that’s tasty too. Why not try adding mushrooms to more of your dishes at home? The benefits to you and your family may be seriously worth it.

Fact: We Are Made For Mushroom Munching!

Mushrooms are full of disease-fighting properties, antioxidants, and a whole mountain of useful nutrients. Copper, a mineral that we don’t produce by ourselves but is super important for our bodies, is found is Mushrooms!