Make the most of the season with these soups 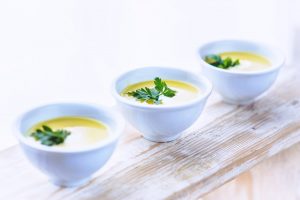 We’ve certainly reached peak Soup Season. Sunday sunsets call less for a simple cheese platter, and more for a piping hot broth off the stove. Everyone has their go-to, failsafe soup, but how often have you tried dipping your spoon into one of the classics? There’s no better time than now to give brewin’ up your favourite soup a red, hot crack.

Some like Corn Soup, others stick to Chicken Noodle, but we’ve gone ahead and named the undisputed, most iconic soups to ever be spooned.

Okay. We’ll admit that the end product looks more like a pot pie than your traditional soup, per se. But, we just like to think of it as a dish that has transcended beyond the limits of what society considers a soup. The main point of difference here is obviously the toasted bread, dressed with Swiss cheese (melted, obviously). Your first impression is the crusty top of the bread and you’d be forgiven for assuming the bread is toasted and crunchy all the way through. But it’s not. As your spoon digs deeper, you realise under the crusty layer, the bottom of the bread has been dipping so coyly into the rich, onion broth.

And here lies the true star of the whole show. The modest onion. It’s the only ingredient to make it into the dish name, so you know you’ve got to get this part right for your French Onion Soup to work. Look to pick a sweet onion like a Vidalia or Walla Walla to absolutely nail the caramelisation process and create some beautiful flavours for glorious soup.

If it’s grown in the ground, throw it in! You can’t really do any wrong when it comes to picking your cast for this Italian classic. As long as you get a handful of the core ingredients right (orecchiette pasta, olive oil, tomato paste, garlic, cannellini beans), the rest is entirely up to you and what sorts of seasonal veggies you can source from your local grocer.

Don’t be afraid to get a little experimental here. Rather than playing it safe with your conventional carrot, dice up some Purple Sun or Yellowstone for a unique flavour and splash of colour.

When it comes to the onions, potatoes, zucchini and tomatoes, apply the same logic! The minestrone is a beautiful soup that lets you experiment with combinations of unique seasonal vegetables from your local fruit and veg shop.

If your goal is to beat the cold, then the Laksa is easily the ultimate winter warmer.

Nothing warms the belly like a healthy spoon of spice, and the Laksa offers up one of the tastiest spoons you’ll ever eat.

Hailing from Malaysia, the Laksa traditionally makes the most of tamarind (amongst plenty of other fresh produce!) to give the broth a distinctively sour taste. The heavy lifting is done by the vermicelli noodles and either chicken or seafood, depending on your preference. But, without an outstanding and complex broth, you’ll be left with a very underwhelming dish.

This complexity you seek is a result of several spices, herbs and even nuts coming together to produce a flavour like no other. The key ingredients in the blend are the lime and lime-leaves. While the lime-leaves are to be strictly of the Kaffir variety, there’s room for experimentation with the lime juice used – an Indonesian lime, or even Finger lime are a step away from your classic Australian Sweet lime but will add an extra layer to the flavour you create.